Home > Causes > How to Recognise a Concussion Headache

How to Recognise a Concussion Headache 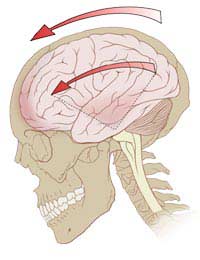 Having a knock on the head is something that should always be taken seriously. Even if you are not knocked unconscious, a blow to the skull can cause concussion, which should be monitored very carefully for 24 hours after whatever caused the head injury. The brain is a delicate organ and, because it is encased in the skull, damage that causes bleeding or swelling in the brain leads to a build up of pressure very quickly. If untreated, this can become rapidly serious and life-threatening.

Recognising a concussion is very important, particularly in infants and toddlers, who can’t explain that they have a headache and don’t feel well.

What are the Symptoms of a Concussion?

A severe concussion involves a period of unconsciousness; blacking out after a blow to the head for just a few minutes is usually an indication that concussion will follow and this requires treatment in hospital. A milder concussion can still develop even if there is no unconsciousness. This is generally not serious, but can cause a headache that lasts for a few days afterwards. Other symptoms include feeling dizzy, having blurred or double vision, feeling tired or moody, or feeling sick and out of sorts. Someone with concussion may also have more difficulty concentrating than usual. Mild concussion usually does not need treatment – the symptoms ease after a few days with rest.

Warning Signs to Look Out For

There are tragic cases in which someone has what seems to be a minor accident, with a bump to the head that does not cause unconsciousness and no apparent concussion, but then their condition gets much worse within a few hours. A headache by itself is not a danger signal, but if this gets worse and the person loses consciousness later, or becomes very disorientated and confused, has a fit or starts to vomit repeatedly, get emergency medical help.

When the head has a bump, the brain hits the inside of the skull and sometimes one of the blood vessels lining the skull is ruptured. This can be quite a small blood vessel that then bleeds slowly, but as the blood has nowhere to go, the pressure builds up and the brain is compressed. This causes more serious symptoms – confusion, nausea, blackouts, vomiting, tiredness, fits, and headache. If not treated very quickly, the brain can be so damaged that the person dies within hours. This is apparently what happened to the actor Natasha Richardson; she seemed OK after slipping on a ski slope but became very ill at her hotel later in the day and died a few days later of her brain injury.

Concussion and Headache in Children

In older children, headache may not be the major symptom of concussion, but it will be obvious that they are feeling confused and ‘not quite right’. Get the child to explain what they feel like and ask them simple questions to test their concentration – one tip is to ask the child to repeat three numbers back to you but in reverse order. Any child over about 6 should be able to do that with numbers under 10 but if they have real difficulty, their concussion may need to be checked out.

It is more difficult in toddlers and babies who can’t speak but constant crying, vomiting, listlessness or floppiness are signs that something may be seriously wrong. Really any sort of head bump sustained in a fall or accident in a child under two should be checked out by a doctor, just in case.

For people who play sports such as rugby, or take part in boxing or wrestling bouts, there is a high chance that they can suffer repeated episodes of concussion. Even though the individual concussions can be minor and not have serious effects, the brain does not respond well to constantly being bruised against the skull. While the risk of developing epilepsy after one concussion is fairly low, it is much higher in boxers and rugby players. Other symptoms such as ‘heavy’ headaches, feeling very irritable, tired and not liking loud noises can also develop.

This collection of symptoms is then diagnosed as a syndrome – post-traumatic cerebral disorder – which can lead to irreversible brain damage. Those affected become much less able to concentrate, are continually plagued by severe headaches and show signs of neurological damage, such as slurred speech, poor memory and sometimes minor physical paralysis.