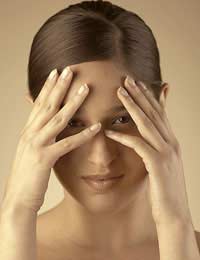 There are various migraine types although they all share common features. The phrase 'retinal migraine' is often incorrectly used to refer to a migraine that has any visual component but this is not the case, as the visual symptoms of a retinal migraine are usually more severe than other variants and are also typically confined to one eye.

A retinal migraine may even exist without the usual headache phase of a migraine attack. Migraines, in general, are more intense than an average stress headache and often start out slowly as a minor ache, before progressing into a throbbing intense pain. Migraine sufferers may also feel nauseous as well as experiencing vomiting and sensory disturbances.

What Makes a Retinal Migraine Different?

It is thought that the muscles around the eye contract, disrupting blood flow and resulting in the temporary vision loss. A migraine with aura usually involves visual disturbances to both eyes whereas a retinal migraine more often involves visual disturbances, including blindness, to one eye. Exercise or any other exertion may prompt a retinal migraine.

A diagnosis of retinal migraine is usually based on the symptoms that you describe, as well as any history of migraines you or family members have experienced. Your doctor may also want to ensure that the vision loss is not related to a more serious condition so he or she may require additional testing.

Your doctor will probably suggest medications used for other migraine types. These can include ergot preparations or non-steroidal anti-inflammatory drugs. If retinal migraines are occurring frequently, your doctor will likely use the same preventative drugs recommended for general migraines. Common drugs for migraines included propranolol and verapamil. Because of the association between exercise and retinal migraines, you may need to avoid excessive physical exertion during exercise or sports. You may also need to monitor any activities that precede a retinal migraine attack so you can pinpoint specific activity triggers for your head pain.

If you have been experiencing migraines and find that your symptoms have changed and include vision loss, talk to your doctor about the possibility that you are suffering from a retinal migraine. Although the visual effects of a retinal migraine usually do not last longer than an hour, the loss of sight can be extremely frightening for the migraine sufferer. Preventing attacks and treating them promptly can ensure the health and visual capacity of your eyes as well as helping your migraine head pain.