Home > Case Studies > How I Cope With Menstrual Headaches: A Case Study 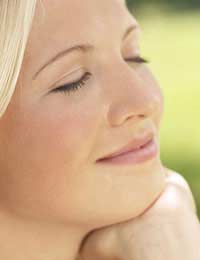 “Ever since I can remember, I usually get a migraine around the time of my period,” says Catherine, who first reported this to her doctor when she was in her teens. “I didn’t get much interest or sympathy – 25 years ago, a male doctor in a small town in Northumberland wasn’t very keen on discussing periods with teenage girls,” she laughs.

Throughout her teens and early 20s, Catherine’s life followed a strange pattern. “I read all sorts of magazine articles and was told by nearly everyone to stop making such a fuss about having a period – but it wasn’t that, that bothered me, it was the menstrual headache that went with it.”

Catherine struggled through A levels and university. “I was fine during most of the month but the day or so before my period, I would get a disabling migraine. I couldn’t work and I was often so nauseous I didn’t want to go anywhere or see anyone. It was like having a life that only lasted for 26 days in every 28,” she remembers.

When she started work in London the year after her degree, she registered with a new doctor and mentioned her menstrual headaches to her on the first registration consultation. “I had seen different doctors at university but the emphasis was on ‘different’. I moved to different parts of Bristol and changed doctors three times while I was there so I never really mentioned my headache problem”, she explains.

The female GP was interested in what Catherine told her and asked her to come back for a longer appointment to answer some detailed questions about her headaches. “She suspected that I actually suffered from menstrual migraines rather than just headaches.”

Over three more consultations, Catherine was asked to keep a headache diary to plot exactly when her headaches occurred. “I also had to write down what I had been doing during the day, what I had eaten and drunk and how much sleep I had – it was hard at first but then I got used to it. The poor doctor had notebooks full of very boring reading to do,” grins Catherine.

The process took about 6 months, and the GP worked on Catherine’s case with a neurologist colleague. After several weeks, Catherine was called back to talk through what they had noticed from the headache diaries. “It was obvious that I had definite habits that changed when I was pre-menstrual. I tended to drink more alcohol the few days before my period, I didn’t sleep well and I ate more sugary, snack foods. That rung true – I always have a real chocolate and sweet craving just before a period,” says Catherine.

Catherine had been given some very strong pain killers to cope with a migraine attack but this was some time before the more modern migraine drugs that we have today. “I now have much more effective painkillers and an anti-nausea medicine, but these were just not available then,” says Catherine.

Instead, the GP and neurologist gave Catherine a coping strategy to try to reduce the frequency of the migraine attacks. “They suggested that I try to avoid other known migraine triggers in the week before my period in case that helped. I did seem to deliberately go for some of the major ones – chocolate and red wine and they thought that if I cut those out completely, it might help,” explains Catherine.

The next month, Catherine was excited to give the new strategy a try and she stopped drinking any alcohol or eating any chocolate or sweets for 10 days before her period was due. “I still had the cravings, so it was hard but I stuck with it and, for the first time in about 10 years, I went a month without migraine. It was fantastic.”

The success was, however, short-lived as the next month; the migraine came with a vengeance. “I know that I had been worrying about a project at work, and I hadn’t been sleeping well and, to be honest, I did weaken and have lots of chocolate, so it was no surprise,” she says.

Over the next year, Catherine eventually changed her lifestyle completely, become teetotal, taking regular exercise and eating a healthier diet. “I became a very healthy eater, with no sugary snacks and no chocolate and I lost about a stone in weight. I also tried relaxation to help me sleep and really managed to reduce my attacks. It’s a strategy that I still practice today – even though the drugs help when I do get a migraine, I would rather avoid one in the first place,” she concludes.