Home > Medication > Migraine Patches: Do They Work and Where Do I Get One? 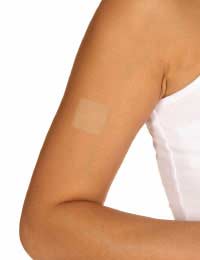 If you suffer from migraine and you need to take regular medications to forestall an attack or to reduce the intensity of the pain or the length of time you spend feeling sick in a darkened room, you are probably used to taking tablets, using nose sprays and even injecting yourself with medicine. This troubles many people who have frequent migraines, which can last over two days in some cases. But, new research is going well to develop a completely new delivery system for migraine medications – transdermal patches

Migraine patches would work in the same way as nicotine patches used in smoking cessation programs. The medication is put into a sticky patch, which is safe to use on the skin, and provides a slow release of the active drug over a period of time.

Pharmaceutical companies have been developing transdermal patches as migraine medicines for some time now and appear to be on the verge of perfecting their techniques. In the early autumn of 2009, the results of a Phase III clinical trial for one product were announced at an American conference on headaches. The patch works equally well whether it is applied to the skin on the arm or on the stomach. In the trial, which included 530 people with severe migraines, the patch showed a significant ability to produce quick and long lasting relief from both pain and the nausea that usually goes with it.

The patches worked just as well as the nose sprays, if not slightly better and there is a good chance that the therapy will be approved by the Food and Drug Administration in the USA. If that happens, approval by the European regulatory body, the European Medicines Agency (EMEA), could follow but this would be required before the patches became available in the UK or elsewhere in Europe.

The Advantages of Migraine Patches

Not only would migraine patches be far more convenient and easier to use, they also would make the drug treatment for migraine more effective because of the nausea issue. Patients with migraine who are badly affected by feeling sick once their migraine pain begins find it extremely difficult to face swallowing a tablet or drinking the water needed to wash it down, even though they need the pain relief so badly. Putting on a patch is possible even if you are actually vomiting, allowing the drug to enter the bloodstream without needing to pass through the stomach first.Many people with migraine who use nose sprays to avoid tablets still find this a difficult way to introduce the drug they need to their body. When you have severe and throbbing head and eye pain, cold liquid sprayed into the nose can be excruciating.

How do Migraine Patches Work?

The drug is absorbed into the patches, where it remains stable during storage. Once the patch is applied to the skin, which is always naturally slightly damp because of sweat, this sets up a small electric current between the patch and the skin. This forces the drug molecule out of the patch and into the skin, where it enters the tiny blood vessels in the dermis. From there, the drug molecule is carried around the body and into the head and brain, where it can act on the migraine. Because the delivery of the drug is consistent over a few hours, the blood level of the drug is very stable and this provides much better pain and nausea relief. There is no peak as there is when you take a tablet that is then absorbed all at once.

Where Can I Get Migraine Patches?

At the moment, you can’t but the signs are that this kind of drug delivery system for migraine sufferers could become available in the USA in 2010 and could be approved in Europe and the UK the year after.