Living With Migraine: A Case Study 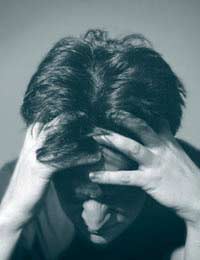 Ben is a slim, well-dressed 31-year old accountant who runs his own business in Winchester. Two years ago he was a passenger in his girlfriend’s car when it was involved in an accident. Slowing down for lights at a large roundabout just outside Southampton, a lorry behind them skidded and hit the back of the car at about 30 miles per hour. Neither Ben nor his girlfriend was badly hurt but Ben sustained a bad whiplash injury and was taken to hospital by ambulance.

“I was more shocked by what had happened than in pain but the whiplash did get very sore over the next few days. An X-ray didn’t show there was any damage and I recovered at my flat for a few days before going back to work. I have my own accountancy firm with two other partners, so it is difficult for me to just disappear,” says Ben.

Two weeks after the accident, Ben was starting to feel better and was looking forward to a concert that he had booked the following weekend. “On the Saturday morning I woke up feeling strange, my vision wasn’t quite right and I felt a bit dizzy. In the next hour, I developed the worst headache I had ever had. It was an intense throbbing pain that seemed to go through my left eye but that was all over the top of my head at the same time. I felt very sick and vomited several times.”

The headache lasted all day and although the pain was gone by the evening, Ben felt washed out and had no energy to go to the concert. In the next few weeks, the headache struck again, sometimes on consecutive days, sometimes with a week or so in between. “I had to go and see the doctor because I was losing valuable time off work and was feeling really low. I began to avoid looking at the computer in case it triggered a headache – which is just not on when you spend your life examining spreadsheets.”

Ben’s doctor was not a specialist but he diagnosed Ben as having migraine attacks and knew the type of medication that would help. He prescribed a medication that was a mixture of caffeine and ergotamine to take at the first sign of a headache to prevent a full-blown migraine attack. He also gave Ben some stronger painkillers in the event of a migraine developing before Ben could take the ergotamine and caffeine.

“For the first three weeks, it was much better. I took the first drug twice as I felt a headache coming on. But then the migraines started to become more frequent and I was having one everyday and taking the ergotamine caffeine treatment everyday as well. I stopped going to work altogether and was just about disabled in my flat. My girlfriend was really worried and insisted I go back to the GP.”

A Change of Plan

As Ben’s headaches were so frequent and severe, he was referred to a specialist who was able to see him privately within a week. "I would have done anything to get rid of the pain and paying to visit a private doctor seemed like a good idea. I couldn’t have waiting three months to see someone on the NHS.”

The specialist confirmed that Ben was having migraines but another detailed X-ray revealed some minor problems with his cervical vertebrae in his neck, possibly sustained in the whiplash accident. “He explained that I was experiencing something called cervical spasms, which were contracting some of the blood vessels in my brain and causing the vascular disturbance that caused pain. The ergotamine was having a sort of rebound effect, causing the muscles to spasm more frequently, causing more headaches.”

For four horrendous days Ben had to stop taking any medication and ride out the worst, most constant 4-day headache he could have imagined. When it subsided, Ben just slept for 24 hours. “But after that, I felt better and returned to work again. The headaches reverted to one every few days.”

The specialist booked Ben in for a different treatment. He arranged for a colleague to inject Botox – the drug often used by cosmetic surgeons to treat wrinkles – into the muscles around his cervical vertebrae. “The Botox works by preventing the muscles contracting, so they could not longer go into spasm. The result was immediate – that was a year ago and I haven’t had a single migraine since.”

This therapy would not work for everyone with migraine but if the headaches are caused by spasms of the muscles around the cervical vertebrae it does seem very effective.